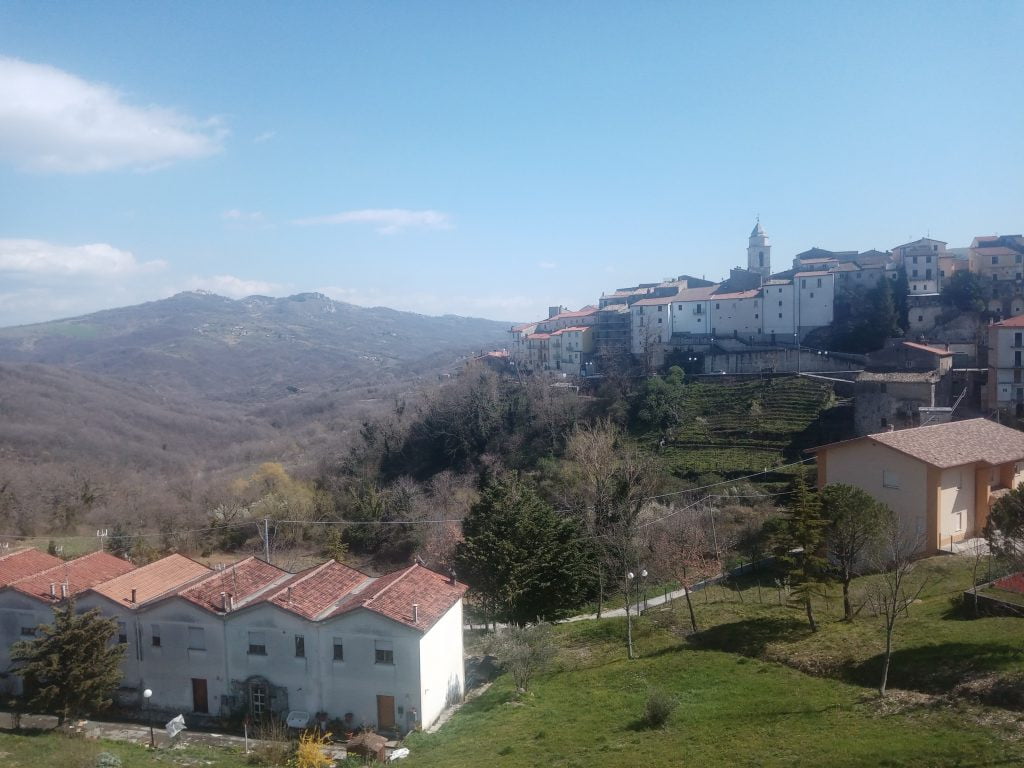 Travel back in time!  If you love history, archaeology and spectacular nature, we have it all here, and maybe some ghosts of ancient Samnite warriors from the Roman legions!

For those who appreciate rugged, remote natural settings, this is a historical and natural walk around a beautiful and tiny, very rustic mountain village and its environs at a 2000 ft elevation in the Italian Appenine mountains. This village is Medieval and walled but the original village was Pre-Roman Samnite.

The Samnites were ancient Pre-Roman mountain warriors who occupied much of southern Italy and later became an important part of the Roman legions. One famous Roman-Samnite, Pontius Pilate, came from a neighbouring village.

We can explore the historical Medieval centre of the village and visit the ruins of a Medieval monastery outside it. We’ll also walk through the surrounding farmland. There is a narrow canal with rapids extending down the mountain through the village, and also just outside the village on the other side is a ruined historical stone bridge and a little waterfall.  Numerous streams cascade down the mountains and the water here is cold and very pure.  The village was built on limestone and its historical centre is surrounded by a Medieval wall – – many houses are built into the ancient wall.

This walk would take up to one hour, or up to two hours to take in all aspects of the village, but a three to four-hour walk would include the higher mountain slope above the Medieval village to visit the ancient Samnite ruins of the original huge ancient town where there are also prehistoric rock paintings.

Wildlife in the area includes numerous majestic red kites and hawks which fly over the village, sometimes just above our heads.  There are also many foxes and wild boar and some wolves, although these are not seen often. There are a great many forests and wildflowers and much scrub.  And while walking outside the village, it’s often possible to run into goatherds herding their goats and to see sheep, goats, horses and chickens on little farms on the village periphery.  There are numerous very old stone cottages and houses throughout the village.

As a classicist and Roman archaeology Masters candidate also qualifying as a physician, I welcome you to explore this amazing area together!

I'm an Australian classicist and MSc candidate in classical archaeology. I'm also studying Medicine. I have travelled extensively since early childhood, mostly by land, in 65 countries on every continent, living in 17 of them. I currently live in a mountainous region of southern Italy with spectacular nature and beautiful historical buildings and ruins from the Middle Ages, Roman and Samnite eras and extending back to the Neolithic period. The Samnites were fierce warriors serving in the Roman legions, and Pontius Pilate came from this area. I look forward to showing you around here including virtually, and in other areas I visit.