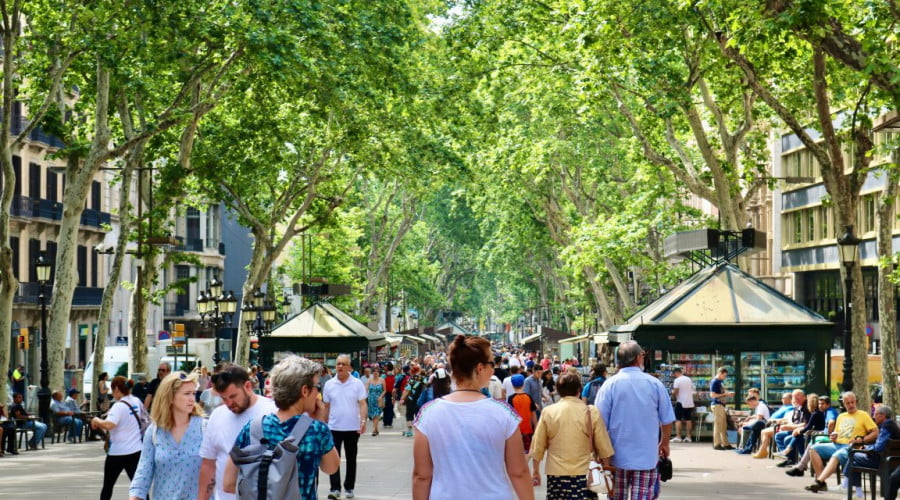 When you visit Barcelona, one of the most interesting spots is La Rambla. It is rich in history and is one of the most popular spots on a tourist’s itinerary. Learning what makes the location special will make your trip even more exciting.

The History of La Rambla Barcelona

It is interesting to learn that the popular destination began as a stream-bed that was filled with sewage. In 1377, Construction began and extended the city walls, which diverted the water and left a street behind. It was this area that grew into the center of Barcelona life. It included large spaces that were ideal for festivals and sporting events. Also, a number of religious buildings were erected. Even though wars and other conflicts caused damage to many of these facilities, much of the city’s history remains. It is possible to stroll the area and get a true sense of the beauty and richness of its Spanish heritage.

Las Ramblas is a Barcelona metropolis that encompasses a number of must-see places.

The Columbus Monument is a 60 m (197 ft) tall monument to Christopher Columbus at the lower end of La Rambla, Barcelona, Catalonia, Spain. It was constructed for the Exposición Universal de Barcelona (1888) in honor to Columbus first voyage to the Americas. The monument serves as a reminder that Christopher Columbus reported to Queen Isabella I and King Ferdinand V in Barcelona after his first trip to the new continent.

The central transport hub in the area is Placa Catalunya. A majestic fountain adorns the space. It is said that anyone who drinks from this landmark will return to the area. For an excellent view, head to the top floor of El Corte Ingles, the largest department store in the city. While there, you can grab local products and souvenirs.

Named for the old University, this space is where locals come to sell various animals, including birds, turtles, and puppies. At one end is Esglesia di Betlem, a Jesuit church. The original building was created in 1553 and was the major Jesuit school in the area. In 1671, a fire destroyed the building. Today’s church was erected in 1680. The current parish provides service to the poor people of the red-light district.

This area of La Rambla Barcelona got its name from the flowers that are sold in the space. At one point, this was the only place that a person could purchase flowers. Here, the Mercat de la Boqueria is housed. You can enjoy perusing over 800 booths that are filled with Spanish specialties. At each turn, you are greeted by wonderful smells, colorful displays, and a variety of fresh culinary delights. Market activity started in the 1200s as a modest gathering and boomed into the attraction it has become today. Thanks to the metal roof, you can wander around in all weather conditions without any inconvenience.

If you are in the mood for art, this is the place to visit. Street performers and living statues are numerous. It is an excellent spot to purchase a unique piece of art as well. If you are interested in a show, you can purchase tickets for the Opera de Gran Teatro Licau.

The bottom part of Las Ramblas is close to the seafront. The backstreets, formerly known as Barri Xines, were considered the red-light district. In recent times, this location has been cleaned up. During the daylight hours, this open space is a great place to get a portrait from one of the talented artists who will complete a masterpiece in minutes. You will view the Columbus Monument, which points to America, and the royal shipyards. Today, it is home to the Maritime Museum of Barcelona. The shipyards, or Les Drassanes Reials, are some of the most interesting of their kind and the most complete. Few others have survived the Middle Ages. It was declared a “Cultural Site of Natural Interest.” If you visit with children, do not miss the wax museum and Teatre Principal.

Las Ramblas is filled with personality. Its architecture is just one link to is amazing past. Visiting this Spanish city will give you a true feeling for the culture. The above attractions are just a few places to enjoy today. While in the area, make sure to appreciate all that the city has to offer. You definitely will become filled with a sense of community, and you will learn how its history shaped modern times. Come visit and explore La Rambla Barcelona with us on either the Original Free Barcelona Walking Tour Or the Original Barcelona Free Bike Tour, for your chance to get off the beaten tourist path, check out the one of a kind Original Barcelona Free Alternative Tour.